I had to get a new phone, so decided to try Syncthing instead of Dropbox for syncing stuff like password files between devices. Seems to be working great: 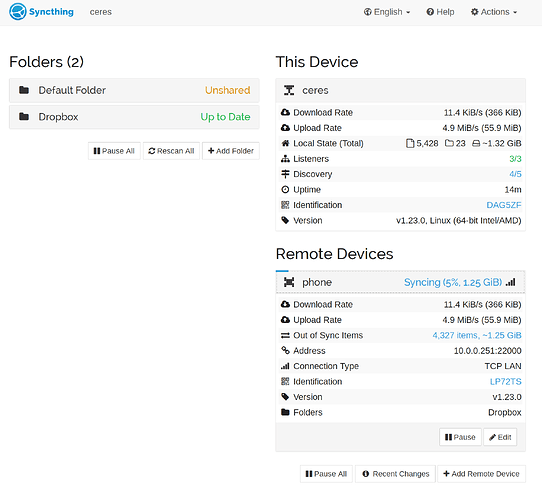 From there I can use Password Safe to open the password file on whatever device I am using.

I’ve been using Syncthing for about a year now synchronizing my laptop that travels to the office with me and my desktop which I prefer to work on while I’m at home since it has significantly more resources. It has made my life very easy keeping these two machines synchronized, however, it’s taken some effort to get the ignore patterns right, especially for build environments.

These are the ignore patterns I use for my SSD that holds all of my Yoe builds:

I’ve been looking through different websites, but I haven’t found where anyone has created a “developer’s list of ignore patterns”. If anyone knows of a good starting point, please share, if not, maybe we should create one?

Still using Password Gorilla (and have for years), but I’m concurrently trying KeePassXC because it allows me to store TOTP keys. When used carefully, this allows me to use multiple devices to unlock accounts that use two factor authentication. I needed to drop Google Authenticator because it doesn’t easily allow you to sync with other devices… and I want to employ Syncthing for the sync.

Anyway, glad to see you have kicked the tires on Syncthing. It’s pretty great.

KeePassXC looks pretty nice! What do you use TOTP keys for?

Does KeePassXC support a tree of password entries (multi-level), vs just a single level of groups? That is one thing I really like about pwsafe/gorilla that I have not found in other password managers (like bitwarden). Often I’ll have something like customer->server->app->accounts. With a single level of groups, it is difficult to organize things like this.