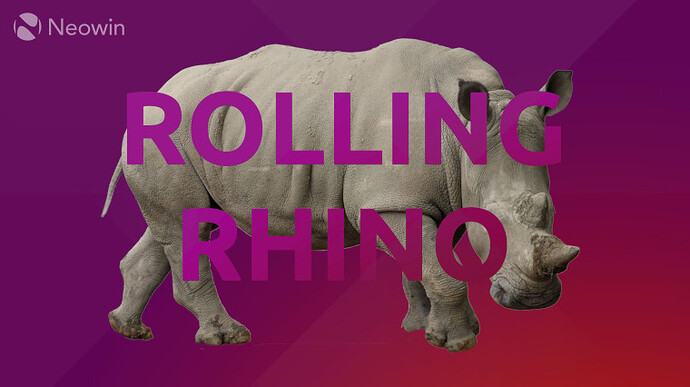 While many of Arch's contemporaries have joined the fray, one notable open-source giant has yet to make the leap. Rolling Rhino looks to change that by converting Ubuntu into a rolling release.

Rolling releases are great for development people but are very hard to support for any kind of business. If things keep changing, it’s hard to train someone on how to use those things. For this reason, and this reason alone, I don’t think moving to a rolling release will help bring in new people to a given OS or distribution.

Microsoft was the king of stability, in terms of how things worked. Windows XP lasted forever, they have retained TONS of backwards compatibility over the course of their OS releases. There’s tremendous value in this.

Every time I visit my parents after a new major phone OS update comes out I have a string of questions to answer, “How do I do this? It used to work like this, now I can’t even find that menu! Why do they keep changing all the things?!”

Rolling releases don’t fix this problem. The only thing they really fix is being able to do less work as a system integrator, as you can outsource everything to the upstream projects by just running trunk and not customizing it much.

Every time I visit my parents after a new major phone OS update comes out I have a string of questions to answer, “How do I do this? It used to work like this, now I can’t even find that menu! Why do they keep changing all the things?!”

Sounds familiar! Anyone who does not want things to change should run XFCE on Linux – the UI is very stable and never changes in any significant way

. The fact the OS is updating underneath is of very little consequence to the user. Even KDE, which is a fast moving project, has a fairly stable and consistent UI. Most OSS technologies have fairly stable UIs. For instance, the Libreoffice UI does not change much over time and when it does, it is small and incremental changes.

I think MS is the main offender in the category of radically changing UIs (ribbon toolbar in office, etc) …

r/linuxquestions - When do you use a stable versus a rolling Linux distro?

I’d prefer to just never upgrade, right up until there’s some new feature which I actually want. But then, I just want to upgrade the one app/library/whatever which gets me that new feature.

This past week I finally upgraded my BeagleBone which runs my PiHole at home from Debian stretch to buster because PiHole dropped support for stretch and finally the pihole updater actually failed because of it. But other than because this one “app” wanted me to update, I had no other reason to (ok, maybe CVE/security updates are a good reason and stretch ended in June).

Even on my daily driver desktop, the only reason I upgraded from Debian buster to bullseye is because I needed some apps which were not already/easily backported in order to get a task done.

Maybe I’m just getting old and cranky, but I don’t want to update and get new bugs.