This morning I ran a few experiments with the LVGL graphics library. In the past, we’ve used GTK+ and Qt for graphics libraries on embedded Linux projects. However, for simple devices with a frame-buffer LCD (no graphics controller), Qt is becoming increasingly difficult to work with as their software renderer is low priority and the licensing is confusing and seems to be in flux. Thus, the LVGL project looked interesting. It’s genesis and primary focus seems to be with MCUs, so it is designed to be very efficient and optimized for software rendering.

So this morning I tried a few experiments. I cloned the main LVGL repo and even though it compiled, it was not obvious how to do anything with it. After a little more digging, I found Linux framebuffer port. I cloned the repo, set up the submodules, and ran it:

I then tried to run it:

This probably makes sense – you can’t use the framebuffer on a modern desktop when X/Wayland/etc is already running on the graphics hardware.

I then tried the pc port.

This is set up the same way – there is a wrapper repo with LVGL set up as a submodule. Again it builds very fast, and this time it runs! 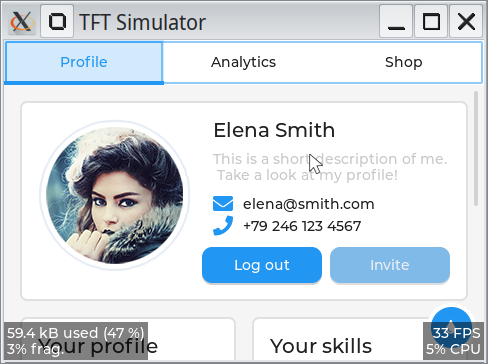 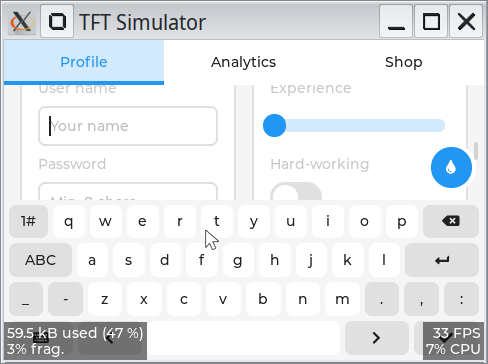 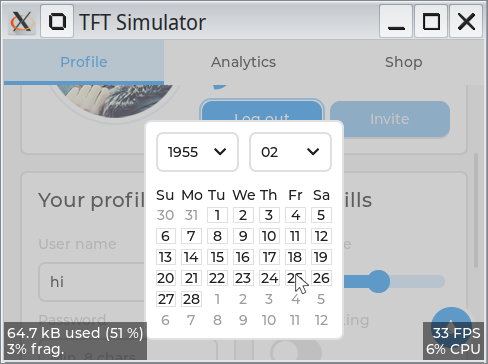 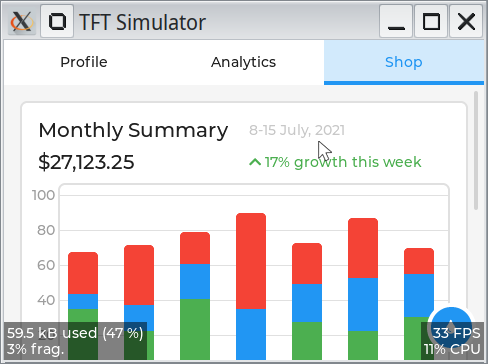 The application is set up for touch input, so it’s not very well optimized to work with mouse, but touch drag, etc seems to work very well. On-screen keyboard also looks very well integrated and responds nicely to clicks in text fields.

The binary is 1.2MB and only links to libSDL2 and libc.

The fb version is only 909KB and only links to libc (may not be exactly the same demo).

This is all quite amazing – a fairly full featured graphics library with minimal dependencies and produces tiny binaries.

I really like the build setup – a super project that pulls in dependencies as Git sub-modules makes a lot of sense. We’ve been doing this for a long time in Yoe. The RP2040 build system is another example.

Software developed for constrained targets is often good and wins in the end. Some examples of this:

LVGL is starting at the opposite end – deeply embedded MCU devices, but it may also scale well into embedded Linux, desktop, and other spaces for people who need an efficient graphics library that gets the job done. When built with musl libc, you could have a completely static binary with no dependencies.

Software developed for desktop systems seems to trend toward bloat because it does not need to worry about the constraints of data center power usage/administration or embedded systems. Unfortunately, many graphical libraries fall into this. Constraints are good …

At my previous job we ended up using Qt 4 for a bunch of things simply due to the licensing of Qt 5 and beyond. Qt 4 had enough functionality in the core LGPLv2 licensed parts that it was useful, if a bit dated in terms of UI and features. Qt 5 license costs were too high for the business case and we were prevented from using many LGPLv3 and GPLv3 software in-product.

Wish I would have known about LVGL at that time, could have been super useful!

Thanks for detailed review. It indeed seems ground up approach which always is good to shed some technical debt. Few things to look forward to.

I’m not sure how useful this is because it seems you’d want to embed the LVGL source in your project as a submodule.

The demo code worked well on both Linux desktop, as described by @cbrake above, as well as on Windows desktop.

If anyone has an idea, please let me know. Thanks!

@collinbrake if you want to cross compile using ubuntu you will need all dependencies cross-compiled as well. Its needing wayland and xkbcommon but these inturn might need more so it can be a bit more packages and they should be compiled for musl since thats what you are using. See this article also on how cross-compiling would work on a native linux distro

You can also take advantage of ubuntu/debian multiarch support, so add arm64 to your base distro

The add the apt sources to /etc/apt/sources.list.d/arm64-cross-compile-sources.list

now you can install arm64 packages

I would think it will be better to use Yocto SDK, perhaps with all dependencies built into SDK

maybe @cbrake can generate one for you using yoe

will generate it and then you can simply install it on your ubuntu box via the self installer that it will generate.

@khem Thank you very much - I am working on it, and should go the yocto route from the beginning, as you said.

Start of a lvgl recipe here:

It has some packaging problems, but does build a binary that I can scp over to the target i.MX8 device. The result is not perfect but runs: 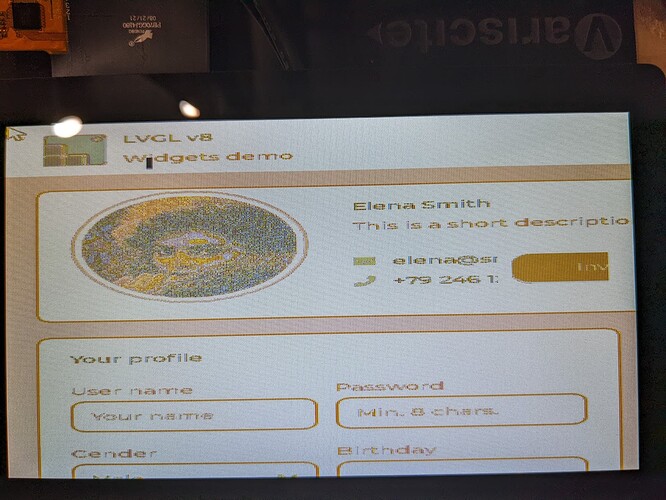 Probably need to configure the FB size or something …

Recipe for the LVGL PC demo:

Again, builds fine, but has some packaging issues.

Copied libsdl over to the target and installed it:

Then scp’d the LVGL binary and ran it:

But, nothing on the screen – probably need X/Wayland, etc.

Asked for help on the LVGL forum, and the author suggested changing the color format – it works! 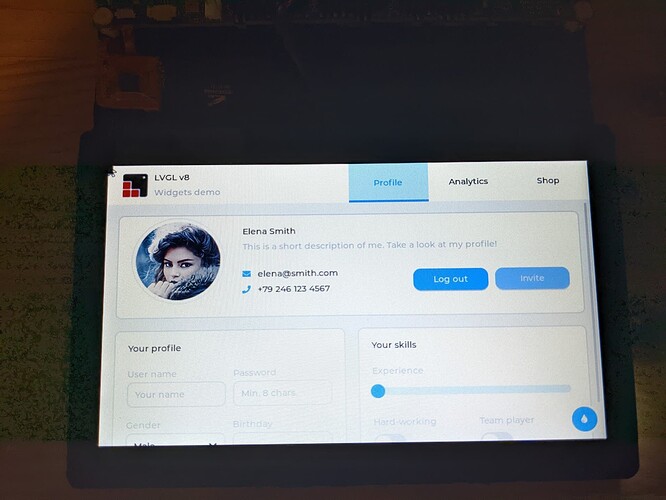 Touchscreen is not working yet, so that is the next project …

for touchscreen perhaps we need to look into 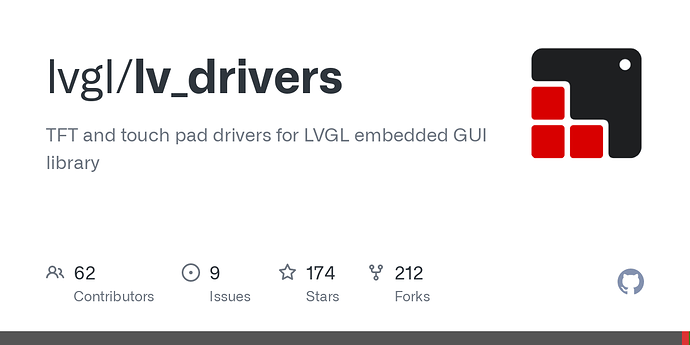 Some porting docs on input drivers

with the latest yoe/master, we are using Clang 15 and now getting a compile error in the fb demo, so opened an issue here:

There is fix I proposed

yeah, forces everyone to clean up their code – not a bad thing. Works, thanks!

These diagnostics have been demoted into warnings in clang 15.0.1 release which we will have shortly for Yoe too. 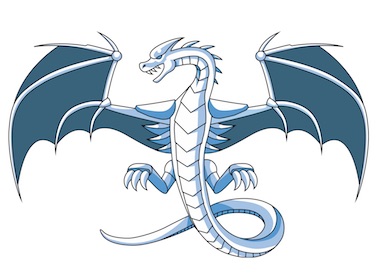 Hello, We’ve noticed some worrying problems resulting from the late change in Clang that causes implicit function declarations to be errors by default. It seems that many configure (e.g. autoconf) scripts were silently relying on the old behavior,...

nevertheless, I agree that 20 years is enough of a time to migrate