If you disabled CGO, Go will use it’s own DNS resolver instead of calling out to the system on (in libc, etc). One example of issues:

<!-- Please answer these questions before submitting your issue. Thanks! --> … ### What version of Go are you using (`go version`)? <pre> $ go version go version go1.18 darwin/amd64 </pre> This is also reproduced against go1.17.8, so doesn't appear to be new to go1.18. ### Does this issue reproduce with the latest release? Yes. ### What operating system and processor architecture are you using (`go env`)? macOS 12.3, Intel (amd64) <details><summary><code>go env</code> Output</summary><br><pre> $ go env GO111MODULE="" GOARCH="amd64" GOBIN="" GOCACHE="/Users/xxx/Library/Caches/go-build" GOENV="/Users/xxx/Library/Application Support/go/env" GOEXE="" GOEXPERIMENT="" GOFLAGS="" GOHOSTARCH="amd64" GOHOSTOS="darwin" GOINSECURE="" GOMODCACHE="/Users/xxx/go/pkg/mod" GOOS="darwin" GOPATH="/Users/xxx/go" GOPROXY="https://proxy.golang.org/,direct" GOROOT="/usr/local/Cellar/go/1.18/libexec" GOSUMDB="sum.golang.org" GOTMPDIR="" GOTOOLDIR="/usr/local/Cellar/go/1.18/libexec/pkg/tool/darwin_amd64" GOVCS="" GOVERSION="go1.18" GCCGO="gccgo" GOAMD64="v1" AR="ar" CC="clang" CXX="clang++" CGO_ENABLED="1" GOMOD="/dev/null" GOWORK="" CGO_CFLAGS="-g -O2" CGO_CPPFLAGS="" CGO_CXXFLAGS="-g -O2" CGO_FFLAGS="-g -O2" CGO_LDFLAGS="-g -O2" PKG_CONFIG="pkg-config" GOGCCFLAGS="-fPIC -arch x86_64 -m64 -pthread -fno-caret-diagnostics -Qunused-arguments -fmessage-length=0 -fdebug-prefix-map=/var/folders/pb/fk1_tmbn1nq32bgpd6njflcw0000gn/T/go-build3259567292=/tmp/go-build -gno-record-gcc-switches -fno-common" </pre></details> ### What did you do? Making a DNS lookup against an ipv6 link-local address hangs and fails on macOS when using thenative (non-CGO) resolver. This appears to manifest within the non-CGO based DNS resolver, but I believe it's more generally applicable to the network stack itself, it's just easier to reproduce through DNS. The simplest reproduction we could come up with was this compiled with `CGO_ENABLED=0`: ```go package main import ( "context" "fmt" "net" "os" "time" ) func main() { ctx, cancel := context.WithTimeout(context.Background(), 30*time.Second) defer cancel() ips, err := net.DefaultResolver.LookupIP(ctx, "ip", "google.com") if err != nil { fmt.Fprintf(os.Stderr, "Could not get IPs: %v\n", err) os.Exit(1) } for _, ip := range ips { fmt.Printf("google.com. IN A %s\n", ip.String()) } } ``` Paired with an `/etc/resolv.conf` of: ``` nameserver fe80::a04e:cfff:fe2f:ad64%en0 nameserver 10.0.0.1 ``` I've deduced this down to explicitly any link-local address (fe80::*) and not generically to ipv6. Other ipv6 addresses, both public and private network appear fine. This behavior is especially concerning because it seems to cascade into larger macOS failures. All DNS seems to start failing on the whole system requiring ultimately a reboot to restore stability. Given this, I believe this is also a bug within macOS that Go happens to be exploiting somehow. I personally don't have a macOS machine to iterate on this, but we've deduced this both with customers running our CLI (https://github.com/planetscale/cli) as well as employees internally. After a bunch of deducing, we've narrowed it down to the link-local address. Again, when compiled with CGO_ENABLED=1, everything works correctly and is fine. The issue only occurs when compiled with CGO_ENABLED=0, triggering the pure Go DNS resolution path. We originally thought this was related to arm64 (M1 Macs), but was able to finally reproduce it on Intel. ### What did you expect to see? Fast DNS resolution ### What did you see instead? Program hangs, eventually times out, in extreme cases, causing entire OS to become unstable. For additional context: https://github.com/planetscale/discussion/discussions/181 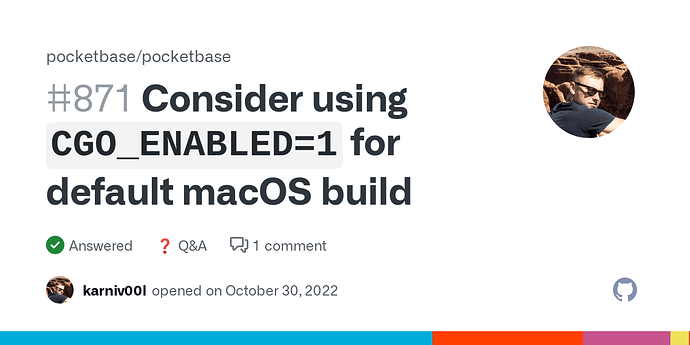 I've personally encountered the same issue for every Go app for mac that makes external requests (docker compose, flyctl, Pocketbase). Issue is that whenever request happens, in case of Pocketb...

I’ve never run into problems with this, but just an example of how hard it is to run without system libs.

a lot of quality engineering has gone into some of the system libs and they have been battle tested as well. So it will be a tall order to replace them, but they should be where it makes sense.

some more information on this issue:

It’s pretty striking to me how different system calls are from the internal language implementations.

Node.js also has a 2 DNS implementations - one that calls getaddrinfo synchronously from the threadpool, and another that always performs a DNS query over the network. I remember running into an issue with slow, unreliable cell modem connections where DNS queries would timeout and it would starve the Node.js threadpool (all threads blocked waiting for getaddrinfo to fail), and ultimately the entire application would become unresponsive. Since we were also reading data from the serial port in real time, this would cause packets to be dropped for a few hundred milliseconds. This was a painfully difficult thing to debug, and my nightmarish experience is part of the reason why the Node.js documentation now explicitly calls this issue out.

In one system we designed, we used a Cat-1 modem which implemented a USB network interface. Apparently this modem acted somewhat like a router in itself and cached DNS queries. When we switched to a Cat-M modem, we had to use PPP over serial to establish the network connection, and then noticed a lot more data being used. We eventually traced it down to DNS queries on every CoAP transaction. So while the CoAP packet was small, the DNS transaction on every packet added significant overhead. We ended up adding dnsmasq to the edge system to cache DNS requests – this is working well.