As a Linux user, I simply use the Git command line client. However, when working with others who run Windows, I occasionally get asked how to set up Git on Windows. Here is one way:

All of the default options for the above applications are fine, except for the ssh agent used in Tortoise Git. Choose OpenSSH as shown below: 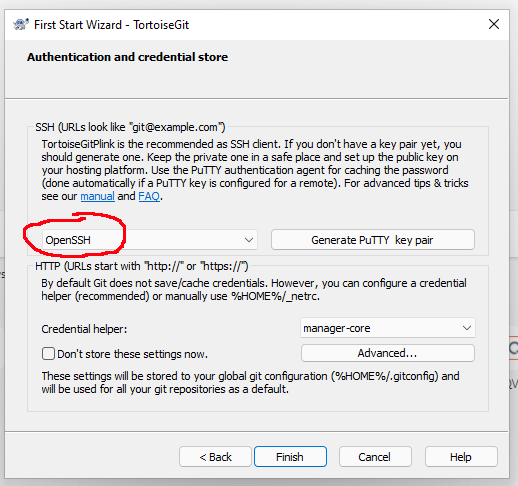 For most Windows users, HTTPS URLs are probably simplest to get started. However, SSH authentication is sometimes needed for some Git servers.

To use SSH authentication, you need to generate a SSH keypair. Open a Git bash terminal and type: ssh-kegen. Type enter to accept all the defaults, including a blank pass-phrase. You can use a pass-phrase, but that is beyond the scope of this document.

You can clone repos using the command line Git, or Tortoise Git. In a Git Bash terminal, you can clone a repo by doing someting like:

Make sure you use the ssh Git URL, and not the HTTPS one.

To clone using Tortoise Git, right click in Windows Explorer, select Git Clone, and enter a URI like above.

Once you clone the repository, you can now use command line Git in a Git bash terminal, or use Tortoise Git in windows explorer.

Note, this is a wiki page so anyone can edit (I think).

Good information. I also use git inside VS code, maybe something like Version Control in Visual Studio Code might help