A GUI for a touch screen embedded Linux device is on my todo-list, and Flutter keeps surfacing in my research of GUI tools.

As a test drive, I installed Flutter on a Windows desktop and followed the demo app instructions.

Android Studio has nice integration with Flutter when configured with the Flutter and Dart plugins: 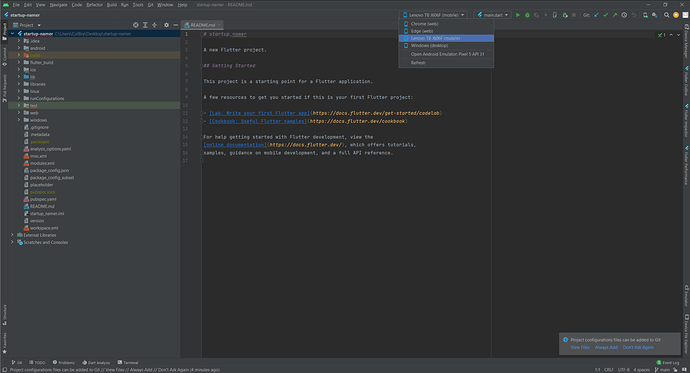 From the dropdown I can deploy my app to Chrome, Edge, a connected Android tablet, Windows desktop, or an Android simulator. 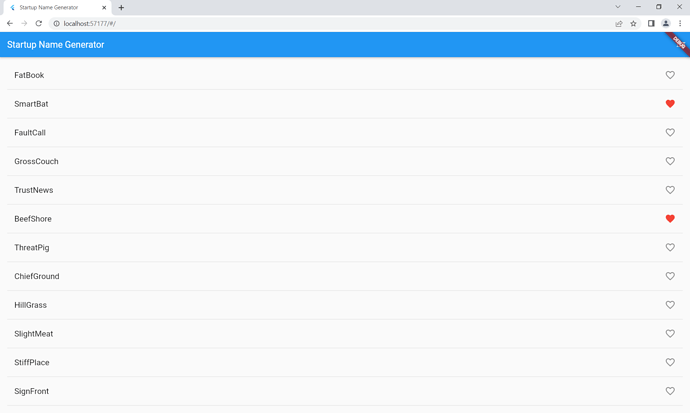 What about compiling Flutter for embedded Linux? I pushed the starter app to a Github repo and cloned it to a Linux desktop. After installing Flutter and Android Studio for Linux (both were available from the Snap store on Ubuntu 20.04) and configuring Android Studio, I was able to run the same app with no problems on Linux desktop, which was the only option in the drop down this time.

Desktop Linux is a breeze, but some searching indicates that Flutter does not have an official build engine for Arm processors. I did find a Flutter extension by Sony called flutter-elinux. I followed the installation guide - it depends on flutter-embedded-linux (the actual Flutter engine) but downloads it automatically when you run flutter-elinux build.

First I tried running the app with Flutter elinux on the desktop:
Inside the created project folder, run the flutter app:

That worked fine. Now to cross-compile for Arm

One thing I need to look in to is setting sysroot with --target-sysroot build option (documentation states that this is required).

This is very useful information – thanks for posting! It looks like you have C++ code failing that is being built with CMAKE, so we should be able to figure this out.

Do you have a cross toolchain installed and configured in your build? How is that set up in flutter-elinux?

The flutter engine and toolchain are supposed to be downloaded automatically when building - is this the toolchain you are referencing?

flutter-elinux download the Flutter engine artifacts such as libflutter_engine.so and libflutter_elinux_wayland.so to <flutter-elinux_install_path>/flutter/bin/cache/artifacts/engine directory automatically when you build your Flutter app. These .so files are download from sony/flutter-embedded-linux/releases built with a specific toolchain. Therefore, if you want to use your toolchain, you need to build it yourself.

For reference, the toolchain that the current .so files are built is below.

When I look in the directory referenced above, this is the result:

However, there are explicit instructions to download a .so file and put it in the cmake build directory:

This embedder requres libflutter_engine.so (Pre-build library of the Flutter Engine). You need to install it in <path_to_cmake_build_directory> to build. See: Building Flutter Engine embedder

You can download a specific pre-built Flutter Engine (libflutter_engine.so) version from Release engine-artifacts-e85ea0e79c · sony/flutter-embedded-linux · GitHub without building it yourself. See also: Use pre-build image

Perhaps this is the issue, because the original error references this file: libflutter_engine.so
And I believe the .so file that the build should be using is: libflutter_elinux_wayland.so @cbrake, is my cmake build directory the top level build directory:

or is it this directory:

As a side note, I found these instructions that reference a toolchain file as well:

You need to create a toolchain file to cross compile using the Yocto SDK for aarch64 on x64 hosts. cross-toolchain-aarch64-template.cmake is the templete file for aarch64 toolchain. Also, you need to modify <path_to_user_target_sysroot> appropriately for your environment if you want to use the template file.

Wow, this is getting complex!

What are your thoughts on: 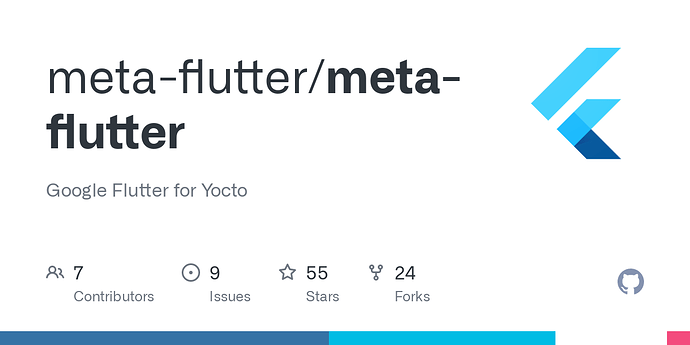 Google Flutter for Yocto. Contribute to meta-flutter/meta-flutter development by creating an account on GitHub.

(interesting this is maintained by someone at Toyota: https://github.com/jwinarske) 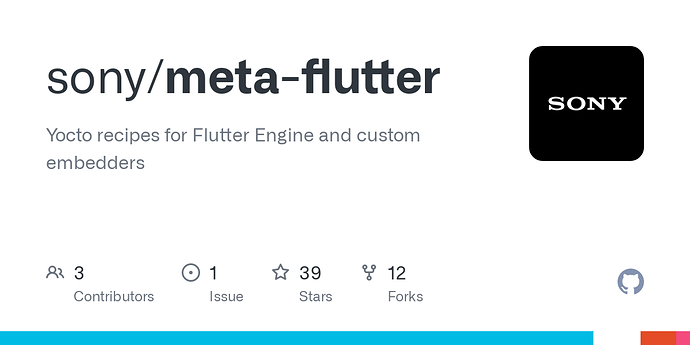 Typically, when we need to cross built stuff that includes C++ code, we either do that in Yocto, or generate a SDK from Yocto with all included library dependencies.

Using the flutter-elinux repository worked for desktop (as did the regular flutter install) but I am having continued issues in cross-compiling it for arm64.

This failed as well - I plan to move forward with flutter as a Yocto layer. Setup:

Side note: there are a lot of threads like this that discuss interest to make cross-compilation for arm a standard feature of flutter or of go-flutter.

Yeah, I like that meta-flutter/meta-flutter appears to have support for building everything from source. Looking at the flutter engine: 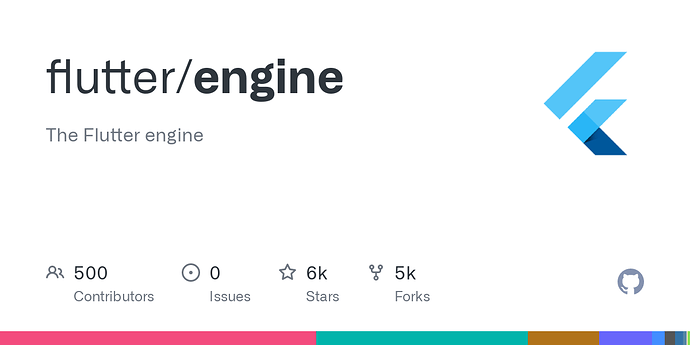 The Flutter engine. Contribute to flutter/engine development by creating an account on GitHub. 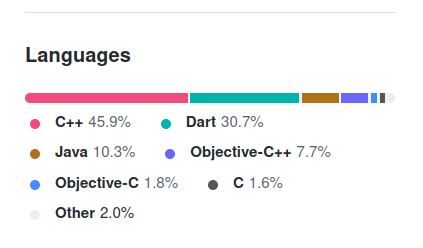 So this is still very much a C++ project, thus you have all the C++ build baggage to deal with. Yocto has good Clang integration thanks to @khem.

There are two ways to approach these projects:

#1 tends to lead to lots of hacks and stuff like downloading toolchain binaries, pre-compiled libraries, etc.

#2 I feel is a better approach as the entire build is automated. The system part is the hard part so you want to make sure that is covered before you settle on a technology.

If you can’t build everything (including toolchains, etc) in an automated way, you do not have a sustainable way to maintain the platform over time, because too much manual hackery is required and things are always changing – pre-built libraries will soon be out of date, etc.

I’ve not looked into this extensively, but on the surface, it appears Sony has taken approach #1 and Toyota, approach #2. However, I could be wrong. 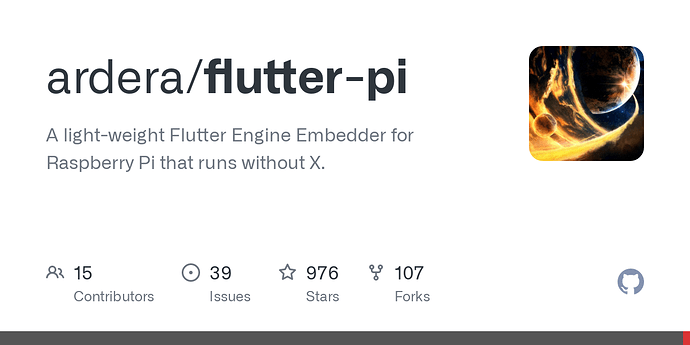 Also looked at go-flutter a bit – wow, what a rabbit hole of technology.

This is all neat, but still seems to be very complex. For systems that don’t need 3D UI, ironically I think Chromium in full-screen Kiosk mode and a web UI is probably the simplest way to add a UI to a i.MX8 class device. For all its faults, the web platform is at least stable and your app does not require linking directly to graphics libraries.

One interesting thing about Flutter Web is they don’t use HTML/CSS much – they do everything in a Canvas element. Below is about the extent of the entire HTML in the page.

Looking at the network assets, it does appear they are using WASM: 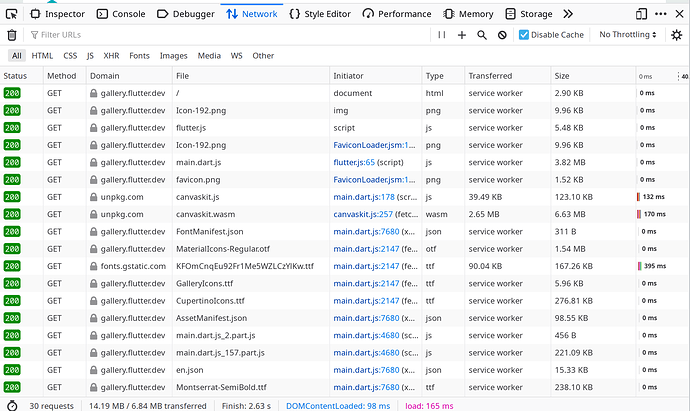 It is a little heavier load than compared to other frontend technologies.

In the examples I’ve tried, I also feel the Flutter web demos are still slow and don’t feel near as performant as native web technologies. This is probably expected as browsers have been optimized for years for HTML/CSS/JS.

So cross-platform is a nice idea, but in practice it is full of trade-offs.

People complain about the how bad mobile apps implemented with web technologies are – maybe I’m missing something, but they seem acceptable to me. As an example, running Discourse on a phone as an app works really well. However, there are limits in terms of APIs as to what the web platform supports.

The interesting question to me is will Flutter become a “platform,” like the web, or just another one-off UI library that will be gone in X years. The Web platform has stood the test of time, so I don’t think it will be going anywhere soon. Browsers are almost an OS in themselves and offer security models that users trust. When I run an application in my browser, I don’t worry too much about security. If I download a native app, I have to ask the question – do I trust this app? Browsers have standard models for accessibility if you use the platform. They have solved many of the hard problems in that they abstract the UI from the base system – this has a lot of value. There are times where you need native performance or APIs, but know what these reasons are.

This following is a good article that discusses some of the past cross platform efforts and provides an analysis of Flutter (TLDR – the author likes Flutter and thinks it will probably be around long term): 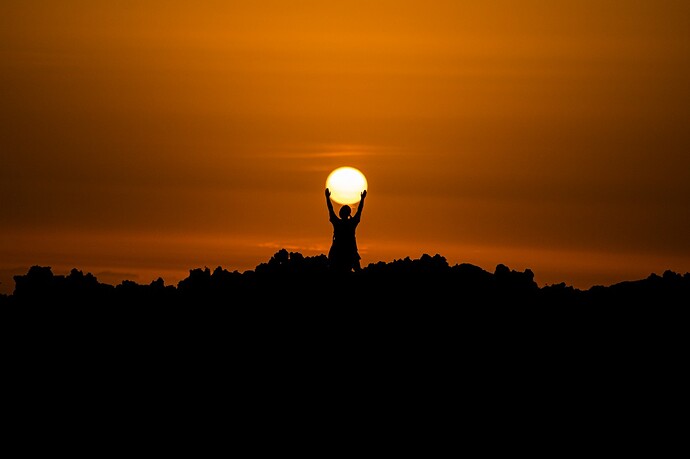 Is Flutter Too Late To Join the Party?

The sun might already be setting on cross-platform technologies

Result on a Raspberry Pi 3 B+: 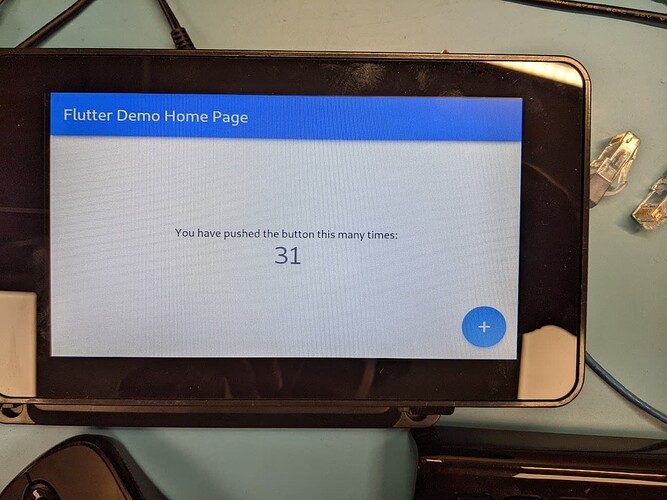 Nice! Is this on raspbian?

I started a flutter app test build in my rPI build:

But then it compiled something, so hopefully it was not downloading *.so files …

The resulting package is 76MB:

The resulting control file in the package does not show any dependencies:

Sizes of some of the files:

There seems to be a large number of images in the app package.

Its odd there does not seem to be a runnable exe – apparently something else loads the libapp.so file or something?

The fact that this built out of the box is pretty amazing.

Next step is to get an image that includes the app …

In looking through the flutter recipes, I was puzzled by the gn:// prefix in the SRC_URI variables.

It turns out this is the Google GN (generate ninja) build tool.

GN is used as the build system for Chromium, Fuchsia, Flutter, etc.

Here is an example of a GN build file:

The Bitbake fetcher source is located in:

(thanks @khem for clarifying this)

@cbrake Which recipies were you looking through? recipies-graphics doesn’t seem to have any like that.

The following is the one I noticed: