I needed to replace the monitor for one of my workstations, so looked at 4K options. Dell is back-ordered on everything I was interested in. Looked at a few other options and nothing else seemed compelling, so ended up getting a AOC U2790VQ 27" 4K IPS. This is not my primary workstation, so figured I could take a chance on the monitor since cost is so low. So far I like it pretty well – at $270, it seems like an excellent value. It has various modes and for brightness and blue light --setting both to text seems to produce a setup that is fairly comfortable to look at – even with a mostly white screen.

Initially, I tried driving it with a Nvidia GT 630 card that was in the machine. It worked, but display seemed slugish and occasionally it would get in a locked up state where the display was flashing strange colors. This typically happened after the computer was idle for awhile, so likely a power management issue. Switching to a terminal (Ctrl-Alt-F2) and back usually fixed it.

I also had a AMD 5450 card on hand which I purchased some time back to try the AMD OSS drivers. This was even worse that the GT 630. Even though the drivers are OSS, they seemed to be kind of a mess to configure and get everything working properly. I never could get it to drive the display at 4K resolution. Puzzling why this 10-year old chipset is still an Amazon’s choice.

So, in the market for a new card, I started slogging through the available options. It seemed like anything recent was $500-$1000 and designed for gamers. I’m just a humble programmer that needs to draw some text on my screen and do some occasional CAD work, so it seems overkill to pay more for the video card than parts to build my 12-core AMD workstation.

I’m also interested in options to drive multiple monitors, which is also a bit of a puzzle to work through. Most cards only have a collection of single HDMI, DVI, DP, ports and did not seem designed to drive multiple displays. Thinking there had to be some options for the CAD/Stock trading folks, I then searched on cards to drive multiple monitors – this turned up some promising results. The AMD 7750 seemed very popular, but the chip-set is rather old. I then looked at the NVS 510 from Nvidia which is designed to drive 4x 4K monitors. The latest Linux drivers support this card. After installing it, everything came up working, and performance seems good. No noticeable lag in the display drawing with office apps or CAD (KiCad and Freecad). 4K video is also smooth. At $107, this also seems like a winner for engineers and programmers. Even though you typically need to use proprietary drivers, it seems Nvidia cards are less fuss at this point. Their GPU model numbers are easier to sort out than AMD’s cryptic code names.

Several of my associates highly recommend multiple monitor setups such as 3, 4K 27" displays, so need to decide if I want to give up the desktop/bench space for more monitors. One opinion is that three monitors is a lot better than two as you are not always staring at the crack between your screens (in a two monitor setup).

I’m still a little torn on the multi-monitor setup. On one hand, it seems a smaller workspace could help improve focus when programming. But, with CAD it would be nice if you could view the schematic and layout at the same time. I should probably give it a try.

What display setup works for you?

two monitor setup is better than single monitor in my experience. I would prefer 3 monitor setup for ideal use of peripheral vision. Getting 4K is good now a days they are not as expensive, I have dual setup with dell 27inch monitors, I wish I had 3rd and then I Will be setup for many years to come. One thing that will be good to keep in mind is that let them all be 4K or FHD, since rendering is easier for video cards when windows are moved around from 1 monitor to 2nd.

Some notes on video resolutions, sizes, and resulting DPI:

The new 27" UHD monitor is sharper than the existing 27" WQHD, so 4K @ 27" does add some value, although WQHD is still perfectly usable.

Somewhere I read that 200DPI is the smallest pixel a human eye can discern.

Went ahead and purchased 2 more AOC, 27" monitors for my main workstation at standing desk. The NVS 510 seems to be driving all 3 4K monitors just fine. 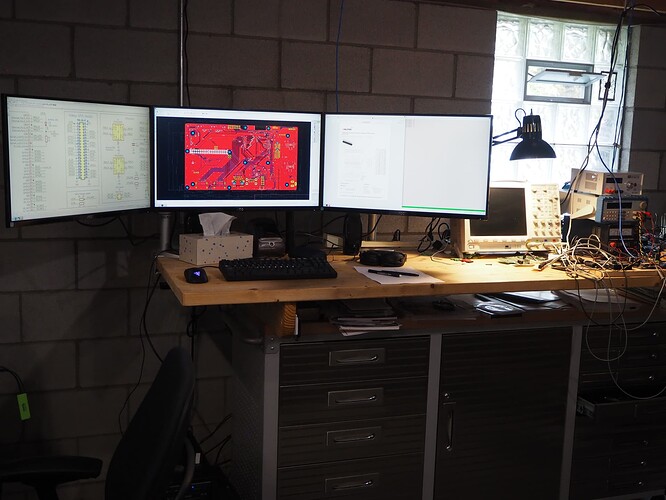 It took awhile to figure out how to get the mouse movement working properly between monitors – I think the key is to not have them touching in the display configuration:

I ended up putting a menu/taskbar on each display and only showing the windows that are on that screen. KDE is pretty nice for configuring all this. Now to figure out how to use all these pixels efficiently …

One neat thing with KDE is the WIN->RIGHT/LEFT arrow keyboard shortcut. This throws the current window into half of the current screen. If you keep pressing the arrow, the window moves 1/2 screen in that direction across all three screens. This is super handy for quickly moving applications around because for many applications it works well to display them in 1/2 a screen (show in below video). 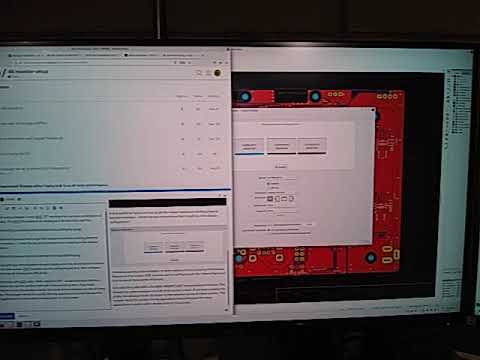 updated my Arch system and X won’t start on the 3-monitor setup. Found the following in dmesg:

It appears Nvidia just released their version 495 driver, which no longer supports the NVS 510 GPU. So, back to the AUR for this card …

The performance does not seem as good since I moved the card from my newer AMD workstation (with one display) to my older Intel workstation with 3 displays – acceptable, but not perfect. I’m not sure if the 3 displays is what is slowing it down, or the older workstation. I guess I should switch workstations and try that.

Anyway, with the AUR driver, I’m back up and running.

Switched the new AMD workstation to the 3-display setup, and performance is much better with a Ryzen x3900 + NVS510, vs the 9 year old Core-i7 + NVS510. Full screen videos now play without dropping many frames, KiCad PCB layout is super snappy, and overall the machine just feels much snappier. However, the 3d viewer in KiCad 5.99 is still painfully slow. Another person claims the 3d viewer is fast for him on a machine using the Intel Graphics – hmm, not sure what is going on here. Before this, I was about to pull the trigger on a high end graphics card, but glad I tried the AMD on the 3x4K setup first – it appears having a modern CPU helps when driving this many pixels.

its interesting, that CPU is playing much role on workloads which are primarily GPU heavy